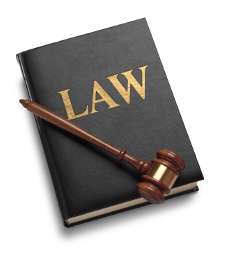 TIP FOR LOWERING YOUR RECKLESS DRIVING CONVICTION IN VIRGINIA

Many Virginians are unaware of an interesting statute used by defense attorneys and judges throughout Virginia that allows a charge of RECKLESS DRIVING to be reduced to what’s known as IMPROPER DRIVING.   Improper driving is specified in the Virginia code under section 46.2-869.

Why is this important for you as a driver?

Matt Kaminsky, president of BESTtrafficschool.com, a DMV-licensed computerized driver improvement clinic in Virginia says: “A reckless driving conviction in Virginia is a class 1 misdemeanor, whereas an improper driving conviction is only a traffic infraction, so any driver facing a reckless driving charge should request and vie for the reduced charge of improper driving.  Drivers should consult a licensed defense attorney for legal advice, but it’s important for Virginia drivers to know that this is a possible option for them, versus just throwing in the towel.”

As you can see, it’s in your best interests to be aware of this statute and to have it in your arsenal of options.  However, just because the statute exists doesn’t guarantee a reduction.  Judges and prosecutors have the power to amend your charge, but usually only exercise the option when your culpability is slight (meaning it’s a minimal case)

So what constitutes a minimal case?  This can vary court to court, but for instance, borderline speed (a charge of speeding just slightly over the limit for what’s considered reckless) is an instance where a judge may give a little.  Also if you were charged as being at fault in an accident, many times the officer on the scene will write you up for reckless driving because that’s all they can charge.  They cannot write an improper driving ticket. Therefore when a judge is presented with all the evidence, he or she may reduce your charge.

If you’ve been charged with reckless driving, or find yourself charged anytime in the future, just know that depending on the severity of your charge, you may have the option of reducing it to improper driving.

Isn’t this option a whole lot better than the alternative?
Posted by MARC BISHOP at 1:31 PM No comments:

The Nevada Department of Motor Vehicles has approved Google's license application to test autonomous vehicles on Nevada public roads.  It is the first license issued in the United States under new laws and regulations that put Nevada at the forefront of autonomous vehicle development.

After driver testing demonstrations along freeways, state highways and neighborhoods both in Carson City and the busy Las Vegas Strip, the department's Autonomous Review Committee met to review Google's safety plans, employee training, system functions and accident reporting mechanisms.  The committee approved the application and is now creating the state's first autonomous testing business license and license plates for the international company.  The license plates displayed on the test vehicle will have a red background and feature an infinity symbol on the left side.

"I felt using the infinity symbol was the best way to represent the 'car of the future,'"  Department Director Bruce Breslow said.  "The unique red plate will be easily recognized by the public and law enforcement and will be used only for licensed autonomous test vehicles.  When there comes a time tat vehicle manufacturers market autonomous vehicles to the public, that infinity symbol will appear on a green license plate." 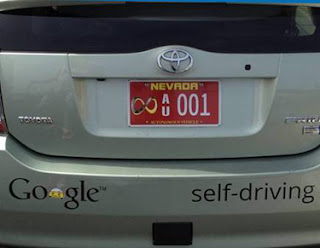 Google was the first company to file an application with the department to test their autonomous system.  Other auto manufacturers have indicated their desire to test and develop autonomous technology in Nevada in the future.

How do you feel about self-driving vehicles on your roads?

Welcome to the future!
Posted by MARC BISHOP at 10:08 AM No comments:


NEVADA CARES ABOUT ITS PEOPLE, TOO

Well, it seems that the state of Nevada is a little more progressive than a lot of people give it credit for. On January 1 of this year, Nevada became only the 10th U.S. state to pass a state law prohibiting the use of  hand-held cell phones while driving.  The law also applies to TEXTING while driving.

NEVADANS BEWARE:  The police are out in full force and thousands of Nevadans have already been ticketed.  Hundreds of warnings were issued for the last 3 months of last year to help prepare people for the new law.  But now that 2012 is off and running, enforcement is strict and police are citing those who ignore the law.

Keep in mind that you may still talk using a hands-free headset and are allowed to touch the phone to “activate, deactivate or initiate a feature or function on the device.”  However, anything beyond that has been deemed dangerous and you will be cited for doing so.  The Office of Traffic Safety reports that the Las Vegas Metropolitan police issued a staggering 2,261 tickets just in the first quarter of this year.  An additional 1,645 tickets were issued by the Nevada Highway Patrol’s northern command.  All in all – this is having a significant impact on Nevadan’s wallets and driving records.

Fines are DOUBLED if the offense takes place in a work zone!

The only good news is that the FIRST offense is not treated as a moving violation for DMV and insurance purposes.  But after the first violation…you’re out of luck and your finances could take an additional hit due to insurance increases.

HINT: According to authorities, cellphone use while at a stoplight is the NUMBER ONE violation of the new law.

While we all may feel like this new law provides us less freedom, the ultimate goal is to save lives.

• A recent study identified talking on a cell phone while behind the wheel as roughly equivalent to having consumed two strong drinks of alcohol.

• About 6,000 deaths and a half a million injuries are caused by distracted drivers every year.

• Talking on a cell phone while driving can make a young driver’s reaction time as slow as that of a 70-year-old.

• Answering a text takes away your attention for about five seconds. That is enough time to travel the length of a football field.

So while the law is an adjustment, it just proves that Nevada cares about its people.  It will take a little adjustment, but really it shouldn’t be that hard.  Get yourself an inexpensive earphone or think about having your vehicle wired with a hands-free device that uses your vehicle’s own stereo system as the speakers.

Isn’t it about time?

Shouldn’t all states jump on board?
Posted by MARC BISHOP at 12:54 PM No comments: