If you’re anything like me, that musical pinging sound, signifying a message notification, coming from the cell phone is like a mating call – very hard to ignore on an almost instinctual level, even when I’m actively driving on the road.  When I hear it, my 20+ years of practiced habit to constantly scan and pay attention to the road wants fiercely to give in to this almost homing pigeon instinct of just concentrating on that little compartment in my messenger bag, sitting in the front passenger seat of my car, where I always keep my smart phone.

This sort of behavior is where driving becomes even riskier than ever.

At my age, I’ve learned to resist that “call”, at least long enough to wait for a chance to either arrive at my destination, or find a decent spot to pull over and check.  That 20+ years was hard-earned experience driving miles of road and “paying the price” for the tailgating, speeding, road rage management issues and a couple of rear-ending instances, I had to learn from – not things I’m proud of doing.

When I was a first time driver going through my “growing pains” of becoming a “good driver” on the road, distractions were usually the other passengers in the car, eating while driving or the knobs and dials on my dashboard – radio, air conditioner or adjusting the mirrors.   I’m glad to report, however, that I never gave in to the temptation of applying eye make up while driving.

These days with modern technology taking on Star Trek the Next Generation proportions with smart phones, e-tablets,  iPads, etc. etc. etc., the distractions for a teen driver have been taken to a new level of “risky”.

Here’s where I throw some stats at you to bring that new level of “risky” into focus.  These stats were pulled off of a page advocating against distracted driving practices on Verizon’s website (direct link just below):

23x
increased likelihood of being in an accident if texting while driving compared to driving while not distracted
Source: textfreedriving.org 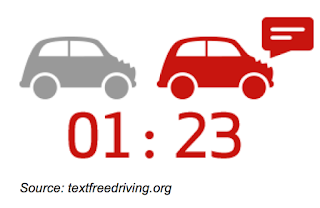 89%
of American adults think sending text messages or e-mails while driving is distracting, dangerous and should be outlawed
Source: textfreedriving.org 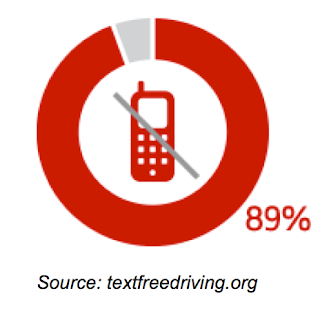 41 states
in the U.S. have laws that ban sending text messages while driving
Source: distraction.gov 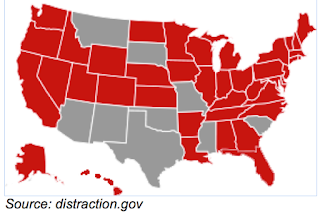 25%
teens respond to a text one or more times while driving
Source: distraction.gov 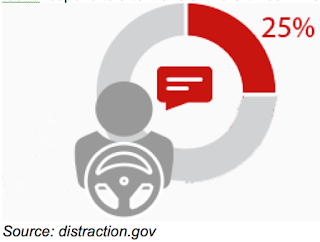 4.6 seconds
pass when a driver's eyes leave the road to text - at 55 mph, it's like driving the length of a football field blind
Source: distraction.gov 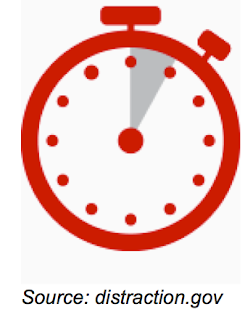 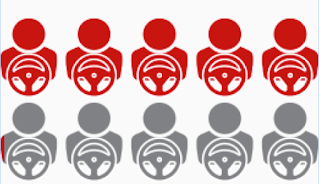 Here are a few more companion articles with stats and studies on the growing problem.  They were written by Jason Siu for AutoGuide.com:

So, now that I have your attention with those hard numbers, I imagine you’ve sprouted a new grey hair and are asking yourself “What can I do to keep my teen driver safer on the road?”

About 2 months ago, Family Circle’s website cited 7 featured apps that are out there, ranging from “FREE” to $100, depending on what you’re looking for.  (I’m just going mention 1-3 of them.  For all 7, please click on the link below.)

This app is reputed to be compatible with Android phones.  Its basic function is to disable text message and email capability on smart phones, with its best feature being a lock on the phone’s screen so that no text messages or emails can be sent or read while driving.  The app “senses” when the vehicle is travelling faster than 5mph.

This app’s compatibility is with iPhone, iPod Touch and iPads.  This app is supposed to monitor location and driving practices of newly licensed teens.  (If parents learn their developing habits, they can intervene as necessary to correct the developing habit.)  This app alerts parents via text message or email when the teen driver exceeds a specific speed and shows where infractions occurred.

This one is reputed to be compatible with BlackBerry and some Windows mobile phones.  Its basic function is to limit access to email, text messages, browsing and calling when a teen is on the road.  Its best feature is to restrict a teen’s cell phone activity while driving and allows calls parents set form a contact list using an online account.
Here, again, Verizon also put out a promotional blurb on their site, earlier this year, with 2 featured apps to help with your teen’s potential “distracted driving” habits linked to new tech.  (To see the full article, click on the link below.)

Live2Txt which is for Android™.  This app allows you to block incoming texts and calls while driving. Turn the app “on” when you get behind the wheel, and you’ll silence your smartphone from incoming notifications, texts and calls. When you receive a message, the app will alert the sender with a customized message that you’re unable to respond at the moment. You also have the option to block incoming calls and texts, only texts or only calls. Live2Txt also comes in handy during other times you may need to minimize interruptions, such as during an important meeting, your next massage or your child’s school play.

Canary which is available for Android™ and iOS.  This is a great option for concerned parents, as it offers instant feedback on your child’s behavior while behind the wheel. When you download the app (available for Android and iOS) to your child’s phone, you can set maximum speed limits and get alerts when your children go over them. You can also get alerts when your teen is traveling outside of predefined safe areas and violating curfew.

And finally, the last app I will reference that caught my attention was mentioned in an article by Sheryll Alexander for Communities Digital News recently on August 17, 2015.

ParentBlocked is similar to the function offered by TextArrest above in that it uses navigation technology to recognize when a vehicle is moving over 10mph, shutting down mobile text messaging, controlling approved calls and more.

For more on this app and the accompanying article with statistics, click here:

http://www.commdiginews.com/life/parentblocked-app-disables-texting-and-other-apps-when-car-reaches-10mph-46791/
These are just a few options out there to help keep your teen driver focused and safe as they build their own experience on the road.  As parents of new teen drivers, it’s up to you to do the research on these options as well as making sure that you educate your teens on the added dangers on the road – not just from their potential bad habits, but the bad habits of others.  It will take a concerted effort to make driving our shared roadways a safe, useful and even fun experience for everyone.  Happy travels!